This past Monday marked the end of tax filing season for 2022. Average Americans again find themselves paying a higher rate than wealthier filers. OMB estimates that the 400 wealthiest Americans pay an average tax rate of only 8.2 percent, widening inequality. Paying a higher tax rate than the wealthiest among us stings all the more as we are aggravating — and subsidizing — income inequality.

With one of the world’s highest GDPs per capita, the United States suffers from greater income inequality than most developed nations. This disparity has macroeconomic consequences, the issue of fairness aside: worsening educational and health outcomes, reducing mobility, even reducing GDP growth.  Today, we discuss how the federal tax system failed to live up to the promise of progressivity and how it could instead be a vehicle to that end.

Over time, sources of income for the wealthy and revenue for the government have shifted, allowing wealthy individuals to avoid paying their fair share. Because of how they structure their income, some of the country’s wealthiest taxpayers actually pay little to no income tax at all, while working Americans pay up to a 20 percent tax rate on income.

While billionaires do technically pay income tax, much of their true income is never taxed. The ultra-wealthy derive a much smaller than average portion of their revenue from wages. Jeff Bezos, for example, received a salary of only $81,840 in 2020. Bezos holds most of his wealth in Amazon shares. When he sells these shares, he can pay a much lower capital gains rate than the current top income tax rate of 37 percent. While the shares he doesn’t sell accumulate over $100 billion in value, he owes no taxes on them, allowing Bezos and other ultra-wealthy taxpayers like him to accumulate wealth virtually tax-free.

America’s top earners don’t always have to realize their capital gains to bring in money from their assets. Instead, they can use the “buy, borrow, die” method to reap the benefits of their capital gains while putting off taxes indefinitely. They borrow against their appreciating assets, not realizing their capital gains or triggering taxes. When they die, the stepped-up basis rule wipes out the taxes that they would have owed on their deferred or unrealized capital gains, allowing their heirs to continue the cycle.

Even if wealthy individuals were actually earning their income through their wages, the top marginal income tax rate has been on the decline for decades. The historical peak of 94 percent occurred in 1944 under the shadow of  World War II when the demand for national sacrifice was high. It was not until 1980 that the top tax rate even dipped below 70 percent. The rate has fluctuated since then, but it has not risen above 40 percent since 1986. In 2017, the Tax Cut and Jobs Act lowered the rate to 37 percent. Although there have been calls to raise the top marginal tax rate again, Republicans and moderate Democrats like Senator Sinema have resisted any increases in income tax rates.

Inequality and the Economy

The inequities in our tax system are made more pronounced by decades of widening income inequality. In 1979, the top 1 percent of households claimed a 9 percent share of total income in the United States. By 2018, the top 1 percent were earning a 16.6 percent share. Over the same period, the share of income held by the bottom 20 percent of households fell from 5 percent to a mere 3.8 percent.  Although this trend is not unique to the United States, the US does have a relatively high level of income inequality. In 2019, the US had a Gini coefficient of about .4, one of the highest among OECD countries and the highest of the G-7. 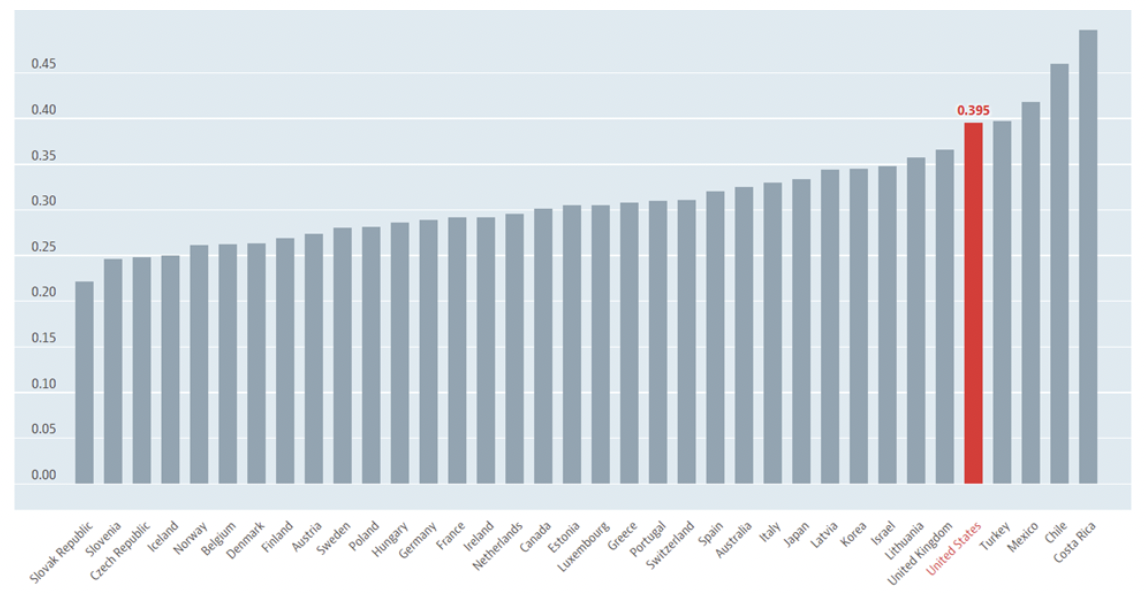 This degree of inequality has significant consequences for the economy as a whole. A 2014 OECD working paper estimated that GDP growth would have been over one-fifth higher from 1990 to 2010 were it not for widening inequality. An IMF study found an inverse relationship between income share accruing to the top quintile and economic growth. A 1 percent increase in the share accruing to the lowest quintile, however, was associated with a .38 percentage point increase in growth.

Reforming the tax code could help mitigate some of the macroeconomic effects that rising inequality has had. Taxes and transfers could be much more effectively used to redistribute income and further narrow the income gap. The temporarily expanded Child Tax Credit, for example, kept 3.7 million children out of poverty in December of 2021. Beyond simply being a net moral good, lifting children and their families out of poverty more permanently would have benefits that extend beyond eligible households. 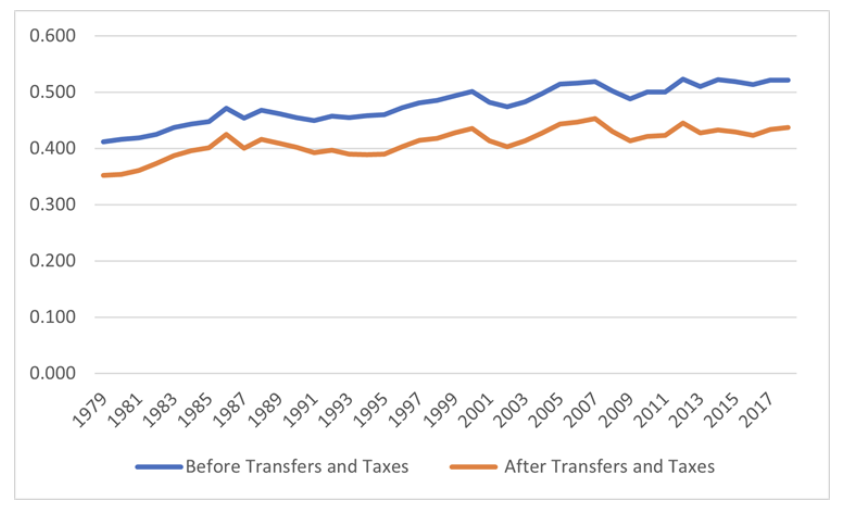 Inequality might be as baked into American society as apple pie, but it does not have to be that way. There are many proposals to make the tax system, and the United States as a whole more equitable, fair, and just. While our tax code is progressive, there is room to grow.

A central drive to reform the tax code is to generate more revenue for programs. Creating a fair tax system that taxes corporations and wealthy individuals to the same standards as middle- and low-income earners is a step in the right direction to lessen inequality in this country. Policy priorities that lower costs for prescription drugs and child care, expand the Child Tax Credit and Earned Income Tax Credit, energy costs, and supply chain relief are easier to deliver with increased revenue from balancing our tax system.

A June 2021 Data for Progress and More Perfect Union poll found 63 percent of voters supported a wealth tax and 61 percent supported raising the corporate tax rate. With a majority of voters supportive of these proposals, it would be a smart decision by Congress to raise taxes on corporations and the wealthy to make the system more equitable.

Getting these tax reforms through Congress will not be an easy feat. After Build Back Better stalled last year, Democrats are hesitant to strike up a new package. It remains to be seen whether Congress will use its remaining reconciliation opportunity to make a lasting impact during this Congress. Alleviating the tax burden on low- and middle-income Americans, while having the wealthy and corporations pay their fair share should be the top priority. This should not be pursued just as a short-term fix to bolster midterm chances, but as a long-term goal to fight inequality and guarantee the country works for everyone, not just the wealthy.