Record job growth, rising wages, and massive GDP gains notwithstanding, yesterday’s inflation news distracts from the macroeconomic picture. The 7.9 percent CPI jump bears on all Americans directly. Many sense that the war Putin started in Ukraine and the consequent energy import ban imposed on Russia have added fuel to prices that were already too hot to handle.

Putin’s war won’t be painless for Americans, but it is a sacrifice we and the rest of the West make for Putin’s choices. We don’t want to subsidize Putin’s war, so we ban Russian oil, natural gas, all petroleum products…and should expect to pay extra at the pump – a sharp short-term pain for what could be a security and economic gain on a global scale in the long run.

In line with economists’ expectations, February’s CPI Report is in with a new high of 7.9 percent inflation year-over-year. Month-over-month inflation is up 0.8 percent after a steady increase of 0.6 percent in the last couple of months, the first acceleration since October. In this update we will break down the overall CPI numbers, contributing sectors like energy, and what this means for the next several months and the midterms. 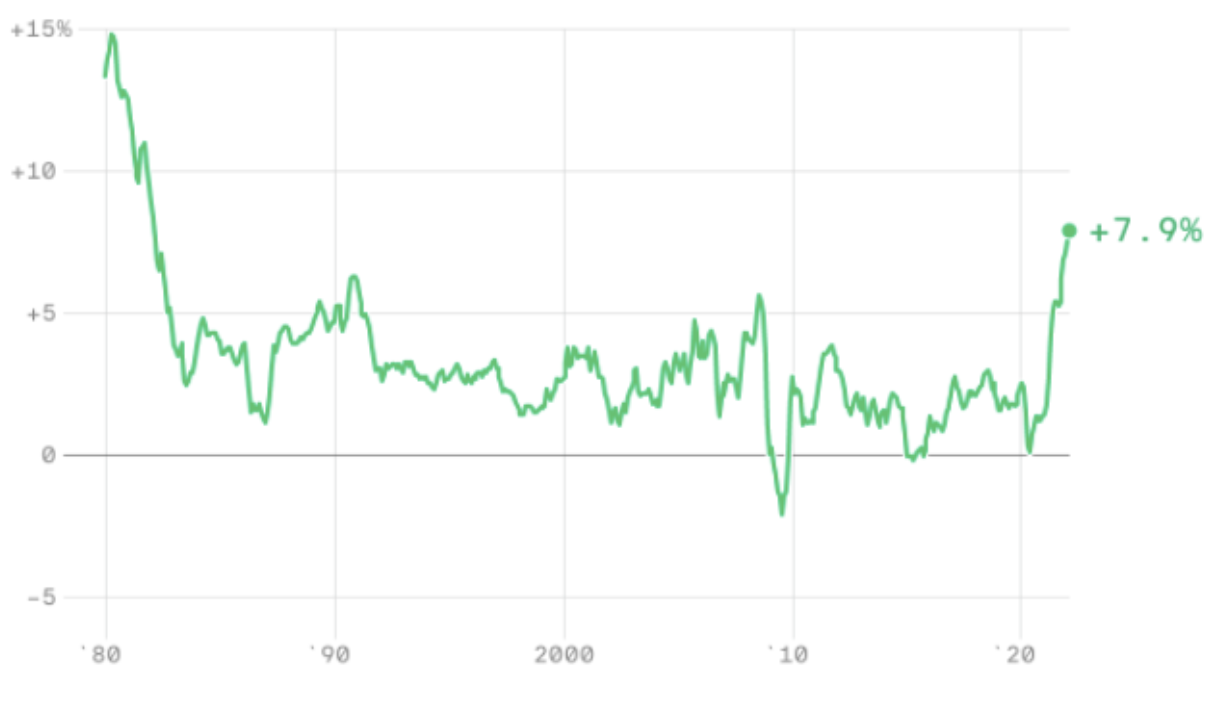 Elevator Has Further to Go

Unsurprisingly, inflation remained elevated in February. Persistent supply chain bottlenecks compounded by a growing international energy and food crisis have kept inflation high. While some forecasts point to a peak in inflation over the next few months, consumers have grown frustrated by pocketbook pain. Inflation today is costing the average household $296.45 per month. The White House and Congress have been undertaking various measures to bring costs down from tackling corporate concentration to keeping key supply chain access points open for longer.  Luckily, we have not entered into a wage-price spiral — wage growth is primarily concentrated in the service sector while inflation is still largely concentrated in energy and durable goods.

A few sectors are contributing significantly to inflation. Pandemic-affected services such as airfare, hotels, and events as well as vehicle-related industries have been strong inflationary pressures throughout the pandemic recovery. Supply chain woes continue to strangle semiconductor chip distribution leading to vehicle-related industries and durable goods facing higher production costs. In addition, the increase in shipping prices, partially attributed to industry consolidation, has exacerbated the price increases, especially on imported goods.

But not every sector is experiencing rising inflation; some have begun to decelerate or even experience falling prices:

The month-over-month acceleration in inflation can largely be attributed to energy. The sector accounted for a third of the inflation reading, accelerating from 0.9 percent month-over-month in January to 3.5 percent month-over-month in February. Energy prices have been steadily exerting upward pressure on inflation throughout the latter half of the pandemic as people hit the roads again. But as people stayed home due to omicron, there was a temporary sign of relief as gasoline prices fell in January. Now that the wave has ended and global energy markets are being rocked by Russia’s invasion of Ukraine, prices are spiking once more.

Average U.S. gasoline prices are currently above $4.30 per gallon, up from around $3.50 a month earlier, and wholesale gasoline prices suggest that average gasoline prices will soon eclipse $4.50 per gallon. Additionally, both countries also account for roughly a quarter of global wheat exports; the conflict will fuel further food inflation. Important to note is that this report only captures the late-month impact of the invasion on prices. Thus, next month’s report will give a fuller picture of just how much energy and food prices have been pushed upward due to the conflict.

The Russian invasion has given some pause to the Federal Reserve’s game plan for the rest of the year. While a 25 basis point interest rate hike is almost guaranteed to occur next week during the March FOMC meeting, Federal Reserve Chair Powell acknowledged the Fed’s plans may be in flux as they watch the situation in Eastern Europe unfold. The current bout of inflation is still largely supply-side, which the Fed does not have tools to manage. Raising interest rates too high or too quickly right now could be a recipe for stagflation with depressed economic activity and elevated inflation. The Fed should acknowledge such risks in the March FOMC minutes so that markets can properly account for the uncertainty.

Peak Before the Polls

As we look ahead to next month’s report and beyond, we can expect inflation to continue to rise.  So far, the impact of high energy prices after sanctions on Russia is somewhat muted. As the war in Ukraine continues, energy and other commodity sectors like wheat will see intense price increases.  Bloombergpredicts a peak in inflation sometime this spring at 9 or 10 percent year-over-year.

Despite great GDP and job growth, high inflation will tar any perceptions of a good economy. Democrats confront the opportunity if not imperative to meet the moment while pursuing policies to alleviate the pains of inflation. Data for Progress found three key message points that resonate with voters – bringing back manufacturing jobs, the infrastructure law, and a fairer economy that doesn’t just benefit CEOs. Hitting on these message points and delivering on policy that combats inflation is critical ahead of the midterms.

We should expect inflation to cool off before November, but is that soon enough?  Ongoing uncertainties and extenuating circumstances, like the war in Ukraine and the pandemic. The international community will also be dealing with higher inflation spurred by energy prices as Russian gas and oil are cut off. While we can’t predict the exact trajectories of these events or how long elevated inflation will persist, Democrats can tackle the present economic situation of high inflation.