A long-awaited, much-debated provision in President Biden’s stimulus package, raising the minimum wage to $15/hour after a decade of stasis, has emerged as a sticking point in negotiations in Congress. Last week, the House Education and Labor Committee successfully inserted the provision in the reconciliation bill, and the House is expected to pass it by the end of next week.

The main challenge moving forward in the Senate is as much procedural as political, invoking the Byrd Rule, which all provisions in a reconciliation bill must satisfy. Democrats will have to hope Senate parliamentarian rules that the minimum wage’s fiscal impact is not “merely incidental.” If it clears, the case for progressives, who see the minimum wage stasis as justice delayed and denied, is made clearer too: the value of the wage hike as a critical stimulus component means it belongs squarely in the package, with benefits extending well beyond beneficiaries.

More than a decade has passed since Congress last raised the federal minimum wage. In that time, inflation has eroded its value, reducing the purchasing power of a minimum wage income by more than 17 percent in the last 12 years. In fact, the minimum wage’s purchasing power has been in decline since 1968, resulting in growing pay inequality between the lowest-paid workers and the middle class.

Real and nominal values of the federal minimum wage, and value if it had risen with total economy productivity 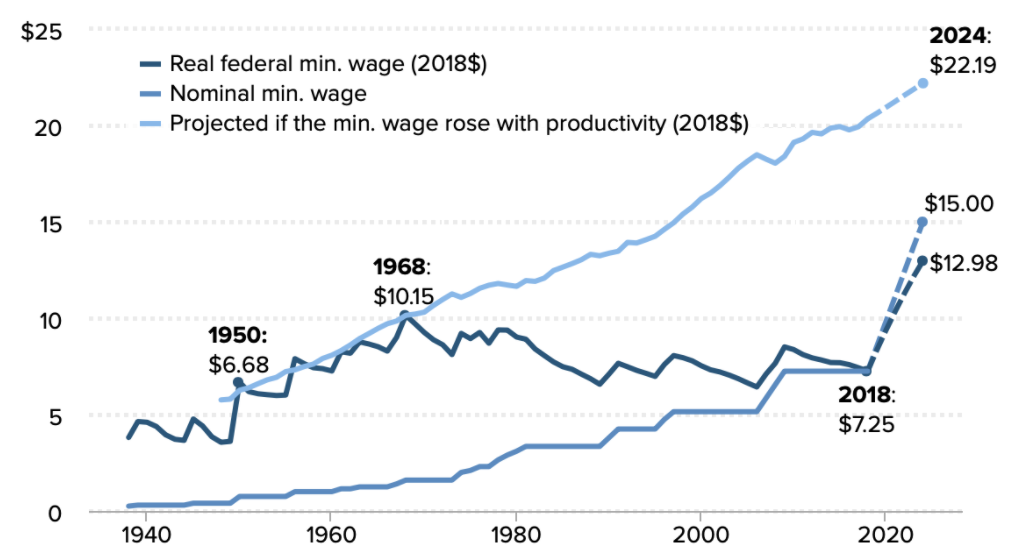 In January, Sen. Sanders and Rep. Scott reintroduced the Raise the Wage Act (now Raise the Wage Act of 2021). The legislation gradually raises the federal minimum wage to $15 an hour by 2025, beginning with an increase to $9.50 this year. After 2025, the bill would adjust the minimum wage each year to keep pace with median wage growth. The proposal also phases out the sub-minimum wage for tipped workers, teens, and workers with disabilities, bringing these wages up to parity with the new minimum wage by 2027.

Over the next four years, the Raise the Wage Act would lift the pay of roughly a fifth of the workforce and bring just under a million Americans out of poverty. Women and workers of color stand to benefit the most from a minimum wage raise. Per the Economic Policy Institute (EPI), 31.7 percent of all working women, 38.1 percent of black workers, and 33.4 percent of Hispanic workers would see a pay increase. Addressing gender and racial pay gaps is essential to ensuring a speedy, equitable economic recovery.

A Minimum Wage Raise as Stimulus

The minimum wage increase is a key element of the Biden stimulus package, and Democrats are attempting to include it in the current reconciliation bill. Just as economic impact payments and unemployment benefits are intended to give individuals in need more assistance, raising the minimum wage would have the practical effect of immediately increasing millions of Americans’ income.

With higher earnings, these individuals will have more money to spend, which would stimulate the economy through equitable growth. Raising the minimum wage offers little economic downside and enjoys broad support from the American public. Though opponents of a $15 minimum wage claim that the policy could lead to job losses, the employment effects of minimum wage raises are controversial and often overstated.

The proposed minimum wage increase should not be viewed as simply an add-on to the package; it is itself a form of stimulus that is especially needed due to the economic crisis and the pandemic’s disproportionate impact on low-income individuals and households.

And this may be Democrats’ best (and only) chance to pass a minimum wage increase this Congress. If the minimum wage were to be introduced as a standalone bill, it would be subject to the filibuster, and getting 10 Republican votes for cloture would be highly unlikely. The only viable option for passage, then, is through reconciliation. Democrats could try to pass the minimum wage later this Congress using reconciliation bills for FY 2022 or 2023, but waiting to do so could allow political opposition to harden.

Minimum wage’s inclusion in the current reconciliation bill is by no means automatic, with the main obstacle coming from the Senate parliamentarian and her interpretation of the Byrd Rule. Earlier this week, the director of the Congressional Budget Office sent a letter to Senate Budget Committee Chair Bernie Sanders saying that the minimum wage increase would “affect most areas of the budget” and that its budgetary impact would be greater than that of two provisions that were ruled eligible for reconciliation as part of the 2017 tax cut bill. This should bolster the case that the minimum wage increase will likely have a fiscal impact.

The CBO score of the House Education and Labor Committee’s reconciliation markup shows that raising the minimum wage would increase the deficit beyond the ten-year reconciliation window. To keep the minimum wage Byrd Rule compliant, Democrats will either have to find budgetary offsets or create a minimum wage “cliff” in 2031, assuming a future Congress would extend it. If the parliamentarian rules the provision ineligible because its fiscal impact is “merely incidental” to the budget, Democrats would have to find offsets to cover any projected budgetary cost. Each of these elements of the Byrd rule must be satisfied to keep the minimum wage in the bill, and if the parliamentarian rules against the compliance regime used for this bill, we should not expect it would work again if tried in a later reconciliation package.

Given the stimulus value of an enhanced minimum wage, this provision should not be used as a disposable bargaining chip. Extending the phase-in period or lowering the topline figure might appeal to business owners, but would be counterproductive as stimulus since it would delay getting individuals the extra income they need.

The current economic crisis has most severely affected low-income workers. This should propel Congress to quickly enact a much-needed and overdue increase to the minimum wage. Congress has prioritized providing immediate relief during this crisis in the form of loans to small businesses and a historic Federal Reserve intervention in financial markets; the same priority should be given to immediate relief for workers.

If the parliamentarian rules in favor of the minimum wage, progressives will need to ensure that all 50 Democratic Senators support passing it as part of the full bill. Although some moderate Senators have expressed reservations about raising the wage to $15, they may not be willing to go as far as to allow the entire relief bill to sink because of opposition to one provision. With no margin for error in the Senate, the key moving forward for Senate Democrats is to maintain a unified caucus to ensure that Americans get the relief they need — including a fair wage.

4,413 thoughts on “The Politics of the Minimum Wage Hike”