Update 524 — Tax Plans: Equity Analysis
Tax Code as Cause and Cure of Inequities

President Biden shook markets yesterday with details of his tax plan he rolled out previously and precisely during the 2020 campaign. Democrats in Congress have a slew of tax proposals on the table as well, many of which are currently under discussion.

The last generation has seen income and wealth disparities in America growing every passing year. There are many ways to tackle inequality, but the most obvious is to use the tax code. Each tweak to the tax code affects the equity equation, so why not make these changes with intention? Below, we evaluate current tax proposals with regard to their impact on this equation.

On Tuesday, the Senate Finance Committee held a hearing examining outcome disparities in the federal tax code. Democrats at the hearing called attention to features of the tax code that disproportionately benefit white Americans and called for greater transparency from the IRS to illuminate racial injustices resulting from tax policies. With President Biden seeking to raise taxes on the wealthy to fund his American Families Plan, tax equity and the definition of a “fair share” will become a focus of the upcoming tax debate.

Inequitable Outcomes Due to the Code

After decades of Republican tax cuts and ineffective tax enforcement, the wealthiest 400 families now pay a lower effective tax rate than most working Americans. As tax collection on the wealthiest households plummeted, income inequality spiked in the United States, demonstrating the effect the tax code can have on income distribution.

Effective Tax Rate of the Wealthiest Families vs. the Bottom 50%

A significant majority of Americans agree that the tax code is unfair. A 2019 Pew poll found that 80 percent of respondents were bothered either “a lot” or “some” by the “feeling that some wealthy individuals don’t pay their fair share” of taxes; 82 percent felt the same about corporations. Ensuring an equitable tax code in which all pay their fair share would involve significant reforms: a tax code that treats capital earnings equal to labor income, fewer loopholes such as the carried interest deduction, and stronger enforcement by the IRS to counter tax evasion.

In recent weeks, several Northeastern representatives, Democrats included, have said they will vote against any tax changes that do not include a repeal of the $10,000 cap on the State and Local Tax deduction. Repealing this cap would be regressive — an estimated 62 percent of the benefits would go to the top one percent of earners.

The Biden Administration and Congressional Democrats are pushing to make the American Rescue Plan Act’s expansion of the Earned Income Tax Credit (EITC) and the Child Tax Credit (CTC) permanent. The ARP temporarily boosted the EITC for childless workers by tripling the maximum credit, expanding the eligible income range, and allowing workers aged 19-24 and over 65 to receive the credit. Making these EITC expansions permanent would provide financial security to 17 million low-wage childless workers, 5.8 million of which are currently taxed into or deeper into poverty. 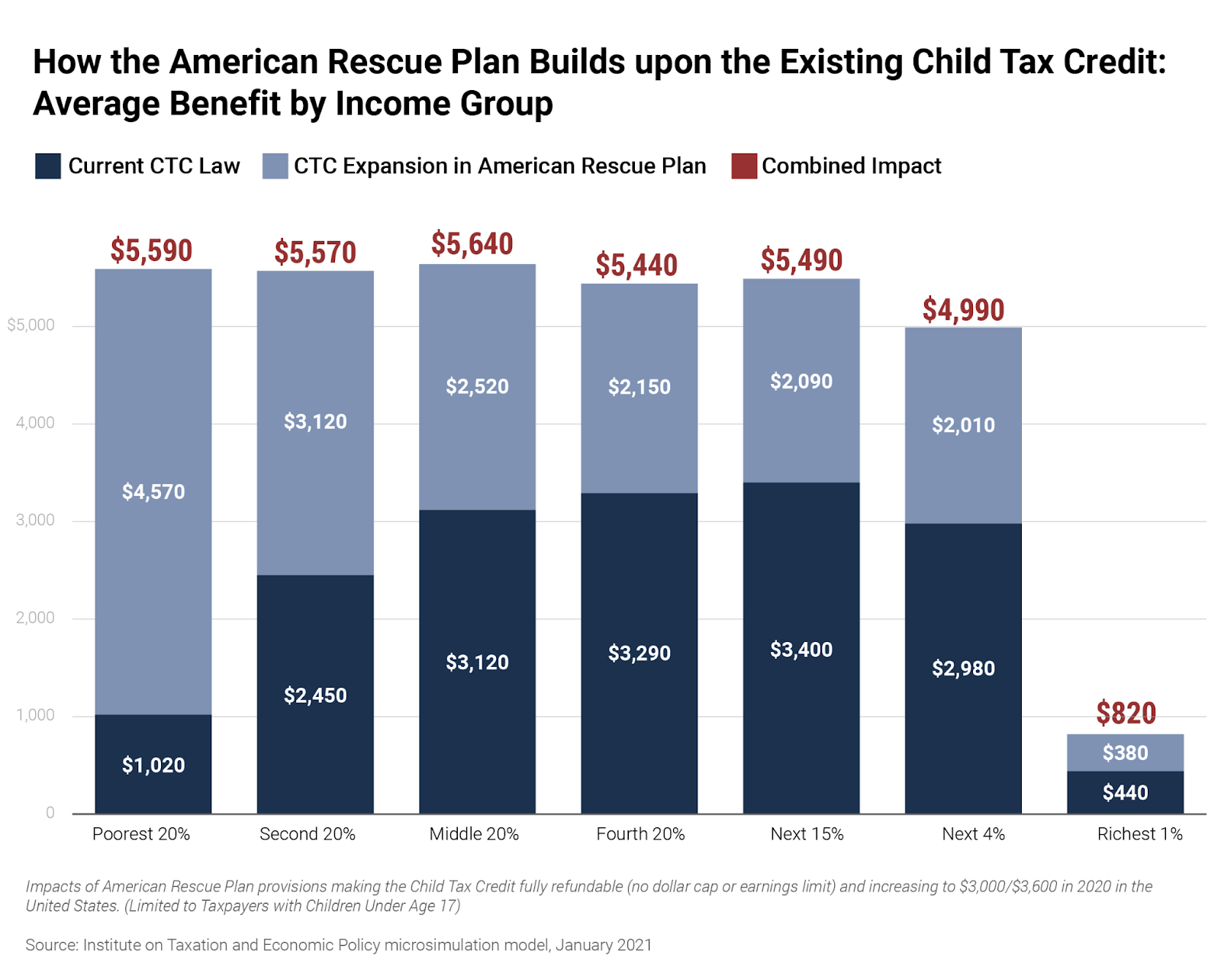 Additional legislative proposals aimed at combating inequity in the tax code likely to receive consideration this Congress include:

Recent news reports suggest that President Biden will call for increases in the top marginal tax rate to the pre-TCJA level of 39.6 percent and the capital gains rate to levels that could make the wealthiest individuals pay as high as 43.4 percent on investment income. These proposed tax increases would serve as pay-fors for Biden’s forthcoming American Families Plan, which is expected to include $1.5 trillion in new spending on poverty reduction, education, child care, and more.

Most changes to the federal tax code affect equity, but some more than others. A near-doubling of the capital gains rate would finally bring an end to the preferential treatment of capital income over labor income which disproportionately benefits the wealthiest Americans, allowing them to avoid paying their fair share of tax on their income. If implemented as proposed, these tax increases would not only raise a significant amount of new revenue but also make the tax code — and the overall economy — fairer.