Per this morning’s jobs report, the US economy added 428,000 jobs in April, average hourly wages are up 5.5 percent from a year ago, and unemployment stayed at a mere 3.6 percent – a near 50-year low – showing that Americans are getting back to work at a record clip.

No good deed goes unpunished and the very strength of the labor market is one reason the Fed implemented a 50 basis point interest rate hike this week, as expected, with further hikes to follow. Federal Reserve Chairman Jerome Powell says he seeks to cool off labor demand to head off a wage-price inflationary spiral. This would risk cutting consumer demand beyond what is needed and undermining the still impressively robust recovery.  Details below.

The Fed is walking a fine line managing the tight labor market and inflation with its recent 50 basis point interest rate hike, pre-announcement of balance sheet reductions starting next month, and expected further hikes. Despite this announcement, the April jobs report showed signs that the economic recovery is not slowing down and that the underlying fundamentals of the recovery are still strong.

The tightness in the labor market has pushed wages up and increased power for workers across the country has helped organized labor to score key gains, particularly against Amazon and Starbucks. Democrats have started to restate support for labor in a bid to maintain it as a critical element of the party’s coalition. 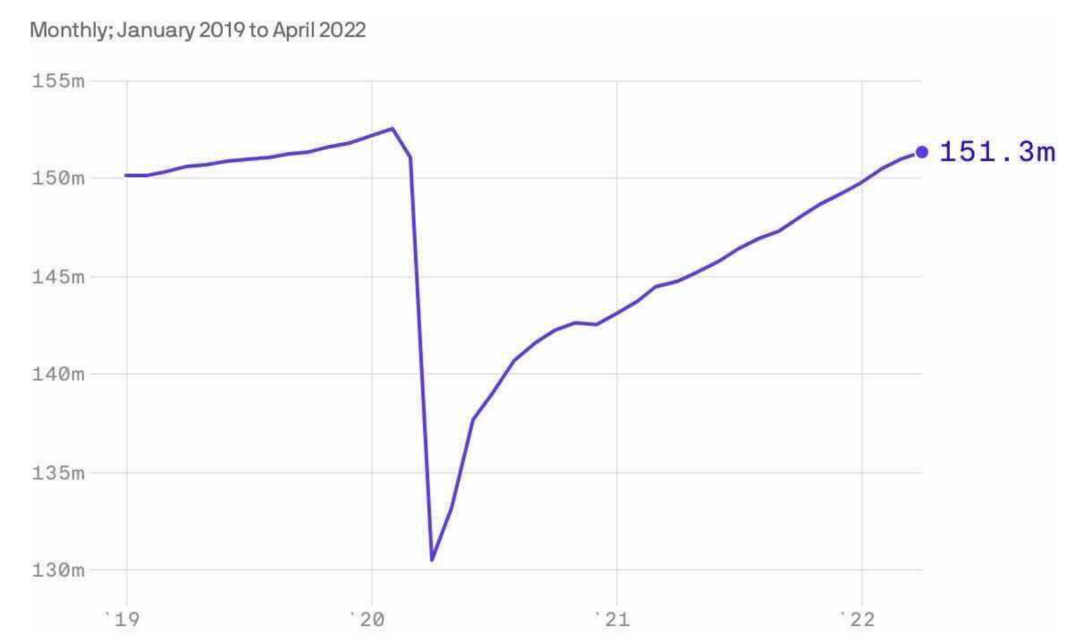 The labor market continues to hum along strongly with a gain of 428,000 jobs in April, with the largest gains occurring in sectors with the largest expansion of consumer demand: leisure and hospitality, manufacturing, and transportation and warehousing. The unemployment rate and labor force participation rate remained virtually unchanged at 3.6 percent and 62.2 percent, respectively. The prime-age full-time employment rate grew by 0.2 percent to match its pre-pandemic peak of 71.8 percent.

The steady numbers are a welcome sign for the economy and workers as the market remains tight. The tight market is most evident in wages with average hourly earnings growing 0.3 percent (the equivalent of 10 cents on the dollar to $31.85) over the month, or 5.5 percent over the last 12 months. The record quits rate earlier this week further highlighted the tightness of the labor market.

But the tight labor market may not be here to stay. In its efforts to bring down inflation, the Federal Reserve may risk cooling down the market too much. The Fed’s decision to raise interest rates by 50 basis points and cut the balance sheet is part of a more rapid monetary tightening process with the explicit purpose of slowing wage growth. Powell made specific reference to bringing the vacancy-to-unemployment ratio into balance from its elevated 1.9 level. His hope is to cool labor demand while encouraging labor supply to come back. This would likely slow wage growth in order to prevent a wage-price spiral. But while wages are up, they haven’t risen fast enough to spark a spiral.

While the Fed is aiming to prevent a spike in unemployment and a recession, a forceful slowdown in wage growth will have consequences for low-wage workers, let alone everyone else. The tight labor market has been a boon for low-income Americans, but cooling the market down would harm them disproportionately.

The benefits of the tight labor market for working Americans can be better understood in analysis by Berkeley Economics Professors Thomas Blanchet, Emmanuel Saez, and Gabriel Zucman, who keep track of disaggregated economic growth through the Realtime Inequality project. Despite the 1.4 percent drop in GDP over Q1 this year (mostly a result of inventory and net export volatility), the economists found the bottom 50 percent of Americans saw their average income grow by an annualized 3.4 percent, after controlling for inflation. While the rest of the distribution saw income erosion, the income growth for the bottom 50 percent is a testament to the distributional benefits of a tight labor market.

Road for Labor Headed Up or Down?

The road ahead for organized labor has its share of challenges. The traditional labor movement is weaker than it has been historically, and corporate and legislative efforts to squash unions are still active. Voting to unionize is not the final step: the unit must still secure a collective bargaining agreement, which many units fail to do. The recent actions by the Fed will also likely dampen union efforts as a looser job market will remove some leverage from workers.

But labor is enjoying a moment of bargaining strength. In recent years, Democrats have begun to return to their labor roots, and not a moment too soon. Approval for unions is at its highest point since 1965, while Biden’s approval ratings have remained below 50 percent since mid-2021. Embracing labor may be Democrats’ key to winning over blue-collar voters in 2022 and 2024.

Picket lines were a common stop for 2020 presidential hopefuls. The majority of Democrats support the House-passed Protecting the Right to Organize (PRO) Act, which would have protected and expanded workers’ collective bargaining and organizing rights. The DNC is weighing a proposal to bar its contractors from engaging in anti-union activity. Biden has been arguably the most pro-labor president since FDR. Early in his presidency, Biden ousted pro-management Trump appointee Peter Robb from his role as General Counsel at the NLRB. In February, the White House Task Force on Worker Organizing and Empowerment released a report with recommendations to promote worker organizing for federal employees and contractors and to increase workers’ awareness of their collective bargaining rights in the private sector.

The union uptick has been a net positive for workers, but to keep up the momentum, federal lawmakers will need to balance tamping down inflation with supporting workers. Failure to bring inflation under control will eat into workers’ wage gains. Cooling the labor market too much will risk stalling the movement. The right balance is out there, and it’s up to lawmakers and the Fed to find it.