The House and Senate have two weeks to complete work on a federal budget for FY22, aka the Build Back Better Act. This bill codifies President Biden’s economic, fiscal, and social agenda, creating jobs, cutting taxes, and lower costs for working families. Payfors are making their way through Congress. The discussion on taxing and borrowing are on a different legislative track, which we will cover next week.

The leadership in the House has tentatively agreed to bring the BBBA to a vote by September 27 alongside the Infrastructure Investment and Jobs Act. The goal is final passage of the bill by the end of the fiscal year, September 30. As Democrats wrap up the markup process for the bill, we highlight the macroeconomic benefits of the package and the key spending provisions, noting the policy and political benefits of the package.

The Biden agenda, and possibly the Democratic majority in Congress, rests its fate on the Build Back Better Act moving its way through the reconciliation process. The Build Back Better Act is poised to invest in climate change resiliency, education, childcare, and a host of other critical domestic initiatives. At the same time, the package will realign the tax code away from the wealthy and back toward working families.  Moreover, it will provide enough macroeconomic stimulus to give the halting recovery and prospects supporters in Congress needed boost.

The Build Back Better Act disburses money to fund critical investments in climate, education, childcare, and paid leave over the coming decade. While some portions of the bill deliver immediate returns, the education and childcare provisions will beneficially affect the economy for years to come, with enough near-term and material impact for Americans to appreciate palpably.

Due to the new spending generated by the reconciliation package, Bank of America is estimating GDP growth to hit 5.5 percent next year. But the long-term growth is where the package shines. Mark Zandi of Moody’s Analytics estimates the reconciliation package, when combined with the American Rescue Plan and the bipartisan Infrastructure Investment and Jobs Act, will help raise real GDP growth to an average of 4.2 percent per year under the Biden administration and an average of three percent real GDP growth per year over the next decade. In addition, the packages combined would help raise the job creation rate to 12.9 million jobs during Biden’s term and 19.1 million jobs over the decade.

The climate provisions alone could create tens of thousands of new, good-paying jobs that will aid the economic recovery while also building community resilience against climate change. Labor productivity would increase as a more educated populace graduates into the labor force. Millions of low-income parents would be able to enter the workforce as well when they are supported by childcare investments. 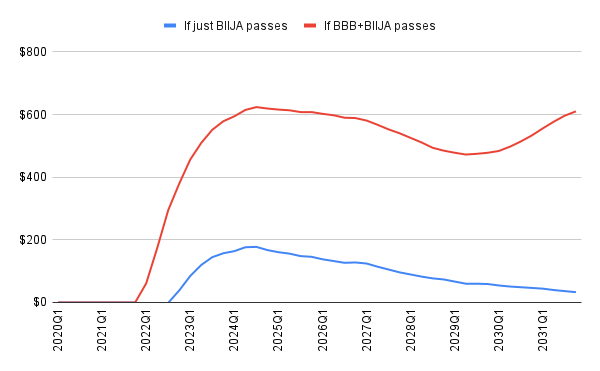 BBBA together with the traditional infrastructure bill are essential to yield the maximum return on public investment. According to a CRS report released this past August, “The short-term impact on economic output largely depends on the type of financing (whether deficit-financed or deficit-neutral investment) and the state of the economy (whether in a recession or expansion). The long-term impact on economic output is also affected by the method of financing, due to the potential for “crowding out” of private investment when investments are deficit financed.” The report went on to say that “economists also expect the type of infrastructure — whether in roads, railways, airports, utilities, or public buildings — to affect the impact on economic output.”

While fiscal conservatives pretend the Build Back Better Act will lead to a budgetary explosion, that could not be further from the truth. The Congressional Budget Office projects that between 2022 and 2031, the federal government will spend approximately $58 trillion on mandatory and discretionary programs, around 20.15 percent of GDP.

When calculating the fiscal impact of the Build Back Better Act, one must first subtract the $500 billion in non-outlay tax provisions, primarily directed towards infrastructure and renewable energy. These tax expenditures will have no impact on mandatory or discretionary spending and will be fully offset through tax increases on the wealthy and mega-corporations. The remaining $3 trillion of the Build Back Better Act must then be subtracted by around $500 billion in Medicare savings coming from the bill’s prescription drug negotiation provisions.

All told, the Build Back Better Act will increase federal spending by less than $250 billion annually, a mere 4.3 percent increase in outlays. Federal non-interest outlays will be a modest 21 percent of GDP.

Not all dollars are spent equally. The Build Back Better Act’s major programs focus on long-term investments rather than short-term stimulus. Below, we detail three of the major components of the reconciliation package which will lead to sustainable and equitable economic growth for decades to come.

Both chambers are furiously attempting to figure out what is passable in the other chamber. The House’s full mark-ups and the Senate Manager’s Amendments may produce some bicameral agreements. Provisions outside the jurisdictions of Ways & Means, Natural Resources, and Energy & Commerce Committees can be assumed to have been “pre-conferenced” or agreed upon by both chambers before mark-ups began. Items within the jurisdiction of these three committees, such as Medicaid and Medicare expansion, Child Tax Credit enhancement, home-based community services, certain clean energy, fossil fuel initiatives, and large swaths of the tax proposals may be heavily altered in the Senate version. Negotiations are ongoing, and any provision could still be altered by the Senate.

As you read this, corporate lobbyists and fiscal conservatives are actively seeking to kill this once-in-a-generation investment package or minimize its impact.  Good for the country and the economy but not for the GOP. Democrats can avoid extended negotiations within their caucuses and resist calls to short the economy. The Democratic Party has historically been rewarded at the ballot box by standing up for working families. But we all depend on it.